On June 13, 2007 we received disturbing news from Kajbar area in Northern Sudan informing that the security forces have used excessive ... all » force to disperse a peaceful demonstration by Nubians protesting the construction of a dam at Third Cataract by Kajbar village. The security forces used tear gas and life ammunitions killing at least 6 people and wounding many others. The date palm trees in the area along the Nile were set on fire when peaceful demonstrators used them as protective shields from sporadic shooting. The security forces started shooting on the crowd from the surrounding mountains when the demonstrators came across a narrow passage on their way to an open area few kilometers south of the site of the proposed dam
Those killed include: 1. Mohamed Fageer Mohamed from Farraig 2. Sadig Salim from Faraig 3. Shaikheldin Haj From Nawri 4. Abdelmoiz Mohamed Abdelrahim from Shrgifad 5. Khairi Osman Khairi from Sabu 6. Mohamed Fageer Diab from Farraig

Scholars Race to Recover a Lost Kingdom on the Nile

On the periphery of history in antiquity, there was a land known as Kush. Overshadowed by Egypt, to the north, it was a place of uncharted breadth and depth far up the Nile, a mystery verging on myth. One thing the Egyptians did know and recorded — Kush had gold.

Scholars have come to learn that there was more to the culture of Kush than was previously suspected. From deciphered Egyptian documents and modern archaeological research, it is now known that for five centuries in the second millennium B.C., the kingdom of Kush flourished with the political and military prowess to maintain some control over a wide territory in Africa.

Kush’s governing success would seem to have been anomalous, or else conventional ideas about statehood rest too narrowly on the experiences of early civilizations like Mesopotamia, Egypt and China. How could a fairly complex state society exist without a writing system, an extensive bureaucracy or major urban centers, none of which Kush evidently had?

In recent reports and interviews, archaeologists said they had found widespread evidence that the kingdom of Kush, in its ascendancy from 2000 B.C. to 1500 B.C., exerted control or at least influence over a 750-mile stretch of the Nile Valley. This region extended from the first cataract in the Nile, as attested by an Egyptian monument, all the way upstream to beyond the fourth cataract. The area covered part of the larger geographic region of indeterminate borders known in antiquity as Nubia.

Some archaeologists theorize that the discoveries show that the rulers of Kush were the first in sub-Saharan Africa to hold sway over so vast a territory.

“This makes Kush a more major player in political and military dynamics of the time than we knew before,” said Geoff Emberling, co-leader of a University of Chicago expedition. “Studying Kush helps scholars have a better idea of what statehood meant in an ancient context outside such established power centers of Egypt and Mesopotamia.”

Gil Stein, director of the Oriental Institute at the university, said, “Until now, virtually all that we have known about Kush came from the historical records of their Egyptian neighbors and from limited explorations of monumental architecture at the Kushite capital city, Kerma.”

To archaeologists, knowing that a virtually unexplored land of mystery is soon to be flooded has the same effect as Samuel Johnson ascribed to one facing the gallows in the morning. It concentrates the mind.

Over the last few years, archaeological teams from Britain, Germany, Hungary, Poland, Sudan and the United States have raced to dig at sites that will soon be underwater. The teams were surprised to find hundreds of settlement ruins, cemeteries and examples of rock art that had never been studied. One of the most comprehensive salvage operations has been conducted by groups headed by Henryk Paner of the Gdansk Archaeological Museum in Poland, which surveyed 711 ancient sites in 2003 alone.

“This area is so incredibly rich in archaeology,” Derek Welsby of the British Museum said in a report last winter in Archaeology magazine.

The scale of the salvage effort hardly compares to the response in the 1960s to the Aswan High Dam, which flooded a part of Nubia that then reached into what is southern Egypt. Imposing temples that the pharaohs erected at Abu Simbel and Philae were dismantled and restored on higher ground.

The Kushites, however, left no such grand architecture to be rescued. Their kingdom declined and eventually disappeared by the end of the 16th century B.C., as Egypt grew more powerful and expansive under rulers of the period known as the New Kingdom.

In Sudan, the Merowe Dam, built by Chinese engineers with French and German subcontractors, stands at the downstream end of the fourth cataract, a narrow passage of rapids and islands. The rising Nile waters will create a lake 2 miles wide and 100 miles long, displacing more than 50,000 people of the Manasir, Rubatab and Shaigiyya tribes. Most archaeologists expect this to be their last year for exploring Kush sites nearest the former riverbanks.

In the first three months of this year, archaeologists from the Oriental Institute of the University of Chicago scoured the rock and ruins of a desolate site called Hosh el-Geruf, upstream from the fourth cataract and about 225 miles north of Khartoum, the capital of Sudan. Their most striking discovery was ample artifacts of Kushite gold processing.

Gold was already known as a source of Kush’s wealth through trade with Egypt. Other remains of gold-processing works had been found in the region, though none with such a concentration of artifacts. Dr. Emberling said that more than 55 huge grinding stones were scattered along the riverbank.

Experts in the party familiar with ancient mining technology noted that the stones were similar to ones found in Egypt in association with gold processing. The stones were used to crush ore from quartz veins. The ground bits were presumably washed with river water to separate and recover the precious metal.

“Even today, panning for gold is a traditional activity in the area,” said Bruce Williams, a research associate at the Oriental Institute and a co-leader of the expedition.

But the archaeologists saw more in their discovery than the glitter of gold. The grinding stones were too large and numerous to have been used only for processing gold for local trade. Ceramics at the site were in the style and period of Kush’s classic flowering, about 1750 B.C. to 1550 B.C.

This appeared to be strong evidence for a close relationship between the gold-processing settlement and ancient Kerma, the seat of the kingdom at the third cataract, about 250 miles downstream. The modern city of Kerma has spread over the ancient site, but some of the ruins are protected for further research by Swiss archaeologists, whose work will not be affected by the new dam.

British and Polish teams have also reported considerable evidence of the Kerma culture in cemeteries and settlement ruins elsewhere upstream from the fourth cataract. Near Hosh el-Geruf, the Chicago expedition excavated more than a third of the 90 burials in a cemetery. Grave goods indicated that these were elite burials from the same classic period and, thus, more evidence of the influence of Kerma. A few tombs had the rectangular shafts of class Kerma burials, graceful tulip-shaped beakers and jars of the Kerma type and even some vessels and jewelry from Egypt.

“The exciting thing to me,” Dr. Williams said, “is that we are really seeing intensive organization activity from a distance, and the only reasonable attribution is that it belongs to Kush.”

The primary accomplishment of the salvage project, the archaeologists said, is the realization that the kingdom of Kush in its heyday extended not just northward to the first cataract, but also southward, well beyond the fourth cataract. At places like Hosh el-Geruf, they added in an internal report, “the expedition found the Kushites’ organized search for wealth illustrated in a significant new way.”

The research is supported by the Packard Humanities Institute and the National Geographic Society. The Hosh el-Geruf site is in the research area assigned by Sudanese authorities to the Gdansk Museum, which invited the Chicago team to dig there.

By this time next year, the dammed waters may be lapping at the old gold works, and archaeologists will be looking elsewhere for clues to the mystery of how remote Kush developed the statecraft to oversee a vast realm in antiquity. 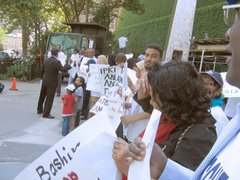